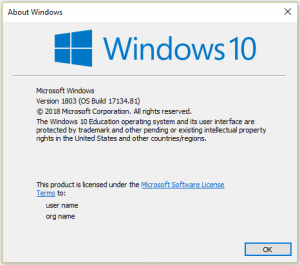 Microsoft Windows 10 operating system last release, launched in April is messing sometimes, up to disabling some vital devices. While upgrading my personal and friends laptops, I experienced different issues :

On this laptop (bought 2 months ago), the update went fast and the old windows files were deleted by the system. Everything worked fine.

On this laptop bought two years ago, the update went fairly quickly, but once it was complete, the keyboard and the touchpad weren’t working any more. To make sure it wsn’t a hardware issue, I restarted, then I pressed several times the key F2, and once into the bios, I found that the keyboard was fine. I restarted Windows and found that the usb mouse was still working. With the mouse I launched the virtual keyboard with the following sequence : [Windows key / Settings / Ease of acces / Keyboard / Use your device without a physical keyboard / switch on]. Eventually I went into settings and in the recovery menu, I chose “Go back to the previous version of Windows 10”. It worked fine.

On this notebook, bought two months ago, since there was not enough space disk ( 32 GB eMMC) to install the update, I was required to insert a USB key during the setup. It took a while for the files to download, but the installation itself took about 5 hours, with the progress indicator increasing a couple of percents during the first two hours.